Merck raises stakes in lung cancer as rivals close in 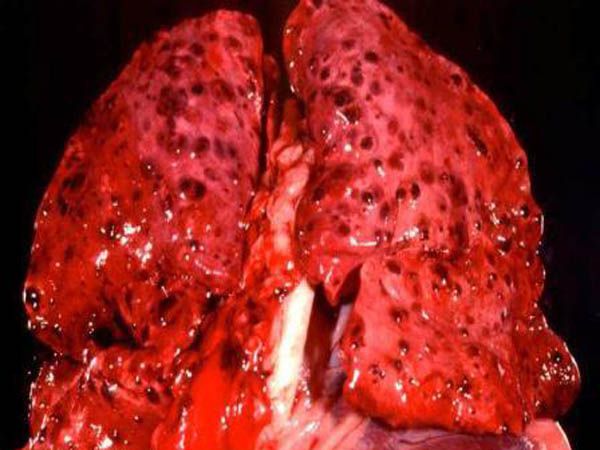 Drugs that block the immune-suppressing proteins PD-1 or PD-L1, such as Merck’s Keytruda and Roche’s Tecentriq, can be lifesaving in the treatment of lung cancer, but only for a small proportion of patients. Two new research insights might spark ideas for combination treatments that could make checkpoint inhibition an effective option for many more patients.

Scientists at the Francis Crick Institute in the U.K. discovered that mutated Ras genes pump out increased levels of PD-L1 around lung tumors. Oncologists can test tumors for high levels of PD-L1, but they can’t pinpoint what is causing the protein to proliferate. The researchers believe that targeting mutated Ras along with PD-L1 may make checkpoint inhibitors more effective.

They tested that theory by giving mice with Ras-mutated cancers compounds to block the effects of the wayward gene on PD-L1 expression. Tumor growth slowed, they said in a press release. The research was published in the journal Immunity.

The effect of Ras mutations on causing the growth and spread of several types of human cancers is well documented. “We now know that they also help to protect the cancer cells from our immune systems, making them more difficult to treat,” said Julian Downward, group leader at the Francis Crick Institute and head of the Lung Cancer Group at the Institute of Cancer Research in London, in the release. “Understanding the mechanisms behind this will help us to develop better treatments.”

Separately, researchers at the École Polytechnique Fédérale research institute in Lausanne, Switzerland, set out to establish an “immune signature” in lung cancer. Using a mouse model of the disease, they discovered that lung cancers are protected by neutrophils: white blood cells that are usually the immune system’s first line of attack.

The scientists depleted neutrophils in the mice and were surprised to discover cancer-killing T cells flooding their tumors. Neutrophil deletion also made tumors more sensitive to therapies that block another immune checkpoint, PD-1. That led the researchers to conclude that neutrophils help cancer hide from the immune system.

Furthermore, they observed that neutrophils change the tumors inside blood vessels by prompting them to produce a protein known as Snail. That protein then starts a cascade of events that further boosts the population of neutrophils. Snail—which had previously been implicated in drug resistance, tumor growth and metastasis—creates a “vicious cycle” with neutrophils that supports tumor growth, the team reported in the journal Cell Reports.

Neutrophils wouldn’t be a good target for cancer drugs, however, because they’re so important in fighting off multiple pathogens that depleting them could lead to unintended side effects. So the authors plan to undertake more research to better understand the role of neutrophils in lung cancer.

Said lead author Etienne Meylan in a statement, “Finding new ways to break the vicious dialogue between neutrophils and tumor cells might impair tumor growth, and also increase the percentage of patients that benefit from immunotherapy.”